I have four hundred books in my library about the war between Germany and Russia from 1941 to 1945. Nothing in history approaches the ferocity and dimensions of the struggle on the Eastern Front. In reading about these battles and the Germans’ early successes in the war, you often come across a paragraph or two that describes an atrocity that shocks you. I can remember the exact descriptions of these evils from books that I read thirty years ago.

In 2017, my wife who is of Polish heritage, convinced me to take a vacation to Berlin, Krakow, Warsaw and Vienna. We visited most of the historical sites connected to World War II. At Krakow we walked through the site of the Jewish ghetto, went through Schindler’s factory and were driven to Auschwitz and Birkenau. A visit to the Death Camps leaves its mark, particularly when you see thousands of pairs of shoes piled high. In Warsaw, we were able to find a small remnant of the wall that once surrounded the Warsaw Ghetto. I wanted to put my hand on it for a moment.

At the Jewish Museum in Berlin I had purchased a book by Saul Friedlander, Nazi Germany and the Jews, 1933-1945, which I read throughout the trip. It renewed my interest in reading about the dreadful deeds perpetrated by the Nazis. When we returned to our home in Minnesota, I pored through the books in my library about the Holocaust and I ordered more. At some point it occurred to me that these disturbing paragraphs should have wider currency. A book that has dramatic information about an atrocity may be read by only a few thousand people. More people need to be shocked by these events. We all have heard that six million Jews were killed by the Nazis, but that has less impact than reading a firsthand account of how they murdered a newborn baby.

It then occurred to me to put these brief descriptions from witnesses, victims, perpetrators and historians online. Fortunately the Web address neverforget.net was available. For some reason I was compelled to do this. I’m not Jewish and I have nothing to gain other than a deep-seated satisfaction that I have perhaps done something good. A few atrocities I have left out, particularly the medical experiments on women. They are too horrible to reprint. As it is you will be shocked to the point of revulsion by what you read and you may not be able to continue. At some point tears are inevitable.

​What is always missing from the understanding of the Holocaust is the scope of it. No mind can comprehend 6 million murders. Each one of those millions of individuals had their own story of horror, fear, pain and anguish. We can only measure this suffering through the words of a few thousand survivors and witnesses. We cannot even comprehend the number of sites where murder took place in Germany, Poland, Russia, Lithuania and elsewhere. Above all, these things that happened can never be forgotten. 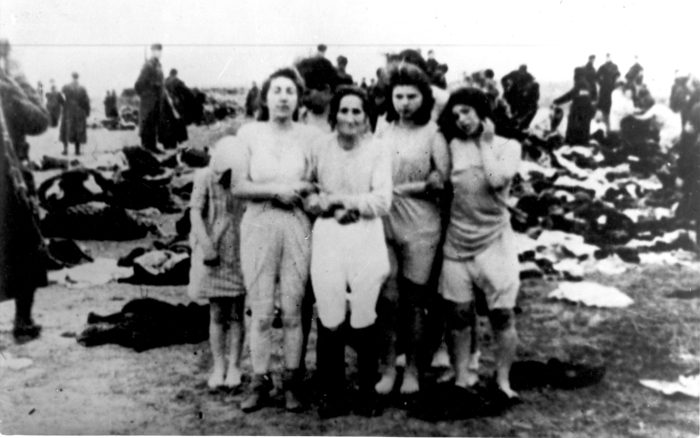 Among the many photographs on this site, I found this one to be the most poignant. I believe this is a grandmother and her daughter with her three girls. The youngest little girl is covering her face and cringing in fear. They have been stripped to their undergarments and will soon be shot.

Thanks to the Holocaust Museum in Washington for the use of their photos. Also the German Bundesarchiv for the above photo, and for photos from the Yad Vashem Memorial in Jerusalem.